The first Requiem out of the gate, performed by Utah Chamber Artists on Monday, set a high standard for those that will follow.

Barlow Bradford’s Salt Lake City-based choir, augmented by singers from Bradford’s University of Utah Chamber Singers and joined by an orchestra made up largely of Utah Symphony players, gave a polished, impassioned performance of this great work.

Brahms’ Requiem isn’t one of those fire-and-brimstone requiems, like Verdi’s or Berlioz’s, but there are moments that inspire awe. Bradford built mighty crescendos in the second movement, which reflects on the fragility of mortal existence, and the sixth, in which the triumphant chorus proclaims that “death is swallowed up in victory.”

The chorus sang with clear, forceful intonation and impressive energy. By contrast, the work’s opening and closing movements, which promise comfort to the living and eternal rest for the dead, were delivered with serene expression.

Throughout the evening, the conductor achieved a lovely balance between the chorus and orchestra.

Baritone Michael Chipman brought gravity to his solos, while soprano Celena Shafer sang with her usual radiance. Both soloists communicated the German text with sensitivity. 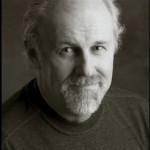 Hal: Why I Sing
Scroll to top