REVIEW – Utah Chamber Artists give audience an evening to remember 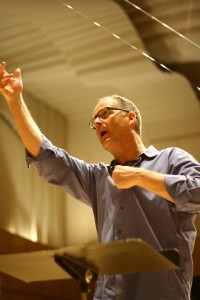 The Utah Chamber Artists’ season opening collage concert in the Cathedral of the Madeleine is one of those concerts that one always looks forward to with a smile. Not only does UCA founder and director Barlow Bradford select a stimulating and wide ranging program, he also deftly incorporates the unique layout of the cathedral to serve the music. One never knows where the next piece will be performed – it could be at a side altar, in the organ loft or behind the bishop’s screen. It’s a genial idea that makes this concert truly a collage in every sense of the word.

Monday’s opener was performed to a capacity audience. And everyone was treated to a concert that allowed UCA’s chamber choir to show off its remarkably talented and versatile members. From the opening “Jesu, Joy of Man’s Desiring” to the closing “For the Music of Creation” (in Bradford’s arrangement and sung to the tune of “Come, Thou Fount of Every Blessing”) – and everything in between – the choir proved time and again that it has the technical and musical chops to sing just about anything, whether it’s a familiar hymn or a contemporary piece. And on top of that they have a gorgeous sound. The 40-voice ensemble sings with rounded, resonant and well blended tones. This is a group that has certainly earned its place as one of the best in a state that prides itself on choral singing.

And the hand picked chamber orchestra, consisting mainly of Utah Symphony musicians, offers instrumental playing of the highest order. Together with the choir, they make beautiful music.

Joining UCA this year was Utah State University’s resident Fry Street Quartet, a group that plays with impeccable musicality. They were featured in several movements from works by Beethoven, Brahms and Janacek, as well as “Source of Life (H2O)” by the American composer Laura Kaminsky. And they joined forces, together with pianist Jared Pierce, on the young Norwegian composer Ola Gjeilo’s Dark Night of the Soul.

Among the numerous works the choir sang, several were especially noteworthy, for both the music and the interpretation. Among these were Henryk Gorecki’s mystical and hypnotic Totus Tuus; Requiescat, by another young composer, the Minnesota-born Eric William Barum; Cancion de Nuestro Tiempo, by the venerable Finnish composer Einojuhani Rautavaara; and an uplifting and lively account of the “Domine fili unigenite” from Vivaldi’s Gloria (performed with the Fry Street Quartet).

Also on the program was a lyrical rendition by baritone Michael Chipman of “Ombra mai fu” from Handel’s opera Xerxes; a captivating account of the Moderato movement from Dvorak’s Serenade for Strings, op. 22; and an effervescent interpretation of “Bordel 1900” from Piazzolla’s Histoire del Tango by the local Oswald Goekeritz Duo (flute and harp).