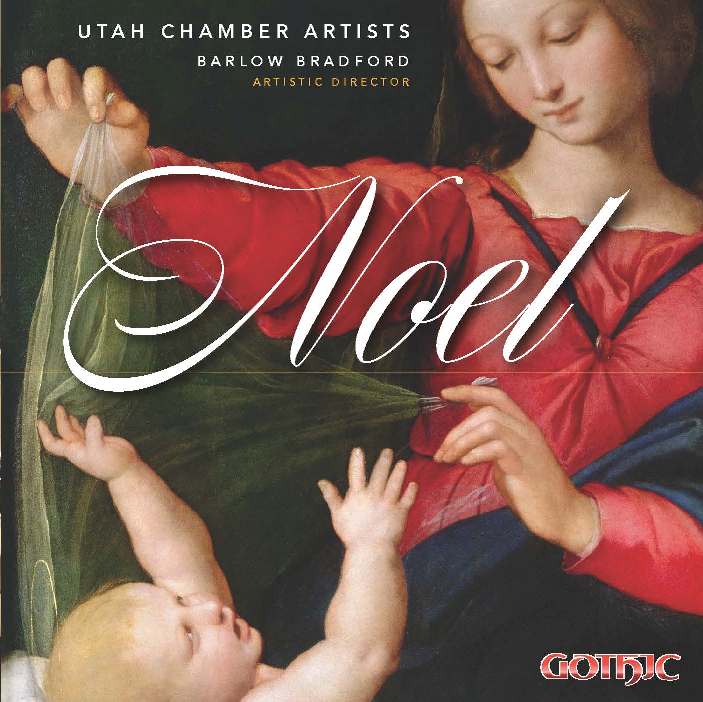 Ding Dong! Merrily on High is one of our most high-spirited and and jubilant Christmas songs. Bradford says he “pictured angel’s dancing” as he put his own stamp on this carol. The tune originated as a secular dance in 1588 and it wasn’t until around 350 years later that an Anglican priest George Ratcliffe Woodward set new words to the tune in 1924. A devotee of old English poetry, he used language that suggests the text was written much earlier.

“The joyous exuberance of Ding Dong Merrily on High makes for a wild ride in a relatively short piece of music. It’s fast, but it quickly becomes intuitive to the point that speed is no longer a challenge.” — Matt Robertson, bass

A Christmas Lullaby was a commissioned by Utah Chamber Artists as one two pieces by Christopher Bradford to be showcased at their Christmas concert. Bradford says, “The simple text paints the famous scene of Jesus being sung to by his mother Mary in the stable. The time signature is a slow 6/8 to depict the gentle rocking of a baby, with implications of 3/4 throughout not fully realized until one of the final phrases.”

“This is just heavenly to sing! It has a feel of swaying in a tree-top cradle, prac tically lulling the singer to sleep as the song suggests! It is written with astute care given to the range of each voice – it’s perfectly in my range and I’m able to tap into an expressiveness that is not always easily accessible, but this piece just makes it so.” — Renel Rytting, alto

Was Not Christ Our Savior?

While Dr. Bradford was looking for Christmas poems, he was drawn to this text by 16th century poet Thomas Tusser, “Was Not Christ Our Savior?”. It references the dichotomy that is embedded in the Christmas story. Many carols allude to Christ’s fate and Bradford says he “can’t help but consider the weight that the innocent baby bears.” Jesus is new to the world, helpless yet destined to save the world. Tusser closes his poem with, “Even Christ, I mean, that virgin’s child In Bethlehem born: That Lamb of God, that Prophet mild, With crowned thorn.”

“This poem is a new discovery for me with an incredible text. I particularly love the lush setting with loud thanks for “that Virgin’s child in Bethlehem” and then the suddenly softer realization that this Child will go on to become “that prophet mild, with crowned thorn, that lamb of God.”  — Nathan McKellar, bass

Sing We Now of Christmas

“Sing We Now of Christmas” is the English version of “Noël Nouvelet”, a traditional French carol that dates from the late 15th and early 16th century. Bradford’s arrangement is playful. It has a light, driving energy with the men’s and the women’s voices “chasing” each other throughout. Finally in the last chorus they come together in a broad unison leading to a triumphant conclusion.

“This was a new arrangement was “commissioned” by our audience at our 2014 fundraiser. Barlow presented a few options and this carol (the most obscure) was chosen as something they wanted to hear most. It’s fun to sing and there are enough time and key changes to keep everyone on their toes.” — Laura Durham, alto

Although “Coventry Carol” reflects on the darker side of the Christmas story,

it has become a beloved part of the Christmas canon. It was the second of three songs included in one of the Coventry Mystery Plays performed by the city’s guilds during the 14th -16th centuries. It was brought to a wider audience after being featured in the BBC’s Empire Broadcast at Christmas 1940, shortly after the bombing of Coventry in World War II. The broadcast concluded with the singing of the carol in the bombed-out ruins of the Cathedral.

“Oh, this song! The message is a sorrowful one, but in contrast to the joy of other Christmas carols it brings balance to the celebration of Christmas. It starts plod ding and resolute then grows into a rich agony, ebbs through stark unison into one more lament, and ends in that haunting open fifth – no minor third – that seems to intentionally leave me confused of whether I’m sad, hopeful, or neither.” — Cami Mower, soprano

It Came Upon a Midnight Clear

This traditional American carol is one that Bradford remembers fondly from his youth. The image of “angels bending near the earth” was an appealing one.  “It Came Upon the Midnight Clear” is an 1849 poem by Unitarian pastor Edmund Sears who asked Richard Storrs Willis to set it to music.

“The a cappella section of this arrangement allows UCA to shine. It’s so reverent and pleading, and it’s a pleasure to sing every single time.” — Nate Benincosa, bass

Away in a Manger

“Away in a Manger” is another American Christmas carol. Over the years, The text has been set to various tunes however the two most well known are by William J. Kirkpatrick and James Ramsey Murray. The origin of the words is unclear. Bradford wanted to try his hand at arranging the “sweet lullaby” and deftly uses both melodies, often in counterpoint, to express the text. He considers the first two verses a child’s view of the scene but the third verse to be more of an introspective, adult consideration of what is actually happening.

“The a cappella section of this arrangement allows UCA to shine. It’s so reverent and pleading, and it’s a pleasure to sing every single time.” — Nate Benincosa, bass

The origins of this Medieval Latin responsorial chant go back to at least the 10th century. The text is from the Holy Matins of Christmas describing the wonderment of the animals as they gaze on Christ: “O great mystery and wonderful sacrament, that animals should see the newborn Lord, lying in a manger!” Composers from Palestrina to Lauridsen have set this profound text to music resulting in music that stirs within the listener a yearning and sometimes the fulfillment of the transcendent. Bradford admits that this composition is a personal favorite among his carols on this album. Utah  Chamber Artists is proud to premiere his thoughtful and beautiful setting of “O Magnum Mysterium.”

“The first time I practiced my part for this, I was alone at a piano in an empty lobby at work. The best way to describe the experience was that it felt like magic. Barlow’s writing fit my alto voice like a glove. When I got to the ‘alleluia’ section it was like angels had descended from heaven.” — April Iund, alto

Many count this among the most familiar Christmas carols. Dickens references it in his famous “Christmas Carol”.  “… at the first sound of ‘God bless you, merry gentlemen! May nothing you dismay!’, Scrooge seized the ruler with such energy of action that the singer fled in terror, leaving the keyhole to the fog and even more congenial frost.”.  Though the tune begins in a minor key it exudes a rather sunny tone and at the close of each verse wishes the listener “good tidings of comfort and joy.”

“I’m always happy when I see this carol in our concert lineup. This arrangement takes you for a musical ride through unexpected harmonies and surprising notes in the otherwise familiar melody.” —Laura Durham, alto

Dr. Bradford has always loved the melody found in “Gabriel’s Message”. He arranged it as one of the online videos we presented during Christmas of 2020. It proved to be one of the most popular. He hears the tune as a “somber lullaby” and took a mystical approach when arranging the Basque carol. The oboe and clarinet set the scene that brings to mind the landscape of the Holy Land. “Gabriel’s Message” is delivered to Mary in an elegant, laudatory style that begins and ends in honor of the Divine Mother accepting and fulfilling her angelic calling. While each Gloria chorus reverently adores the “highly favored lady,” the Lady herself points us back to her soul’s joy in praise of the Name.” — Val Christensen, alto

In Bradford’s version of the venerated, “O Come All Ye Faithful,” he summons his own feelings about the carol and makes it his own. He claims devotion to the arrangements he admired as a young man – those by Leroy Robertson and Sir David Willcocks. Years later he knew that he wanted to interpret the message of the iconic carol and share it with his choirs and audience.

It is thought that “The First Noel” had its rise in France during the 15th century. Some historians think that the traditional melody originated in France as early as the 1200s. The song is thought to have been brought across the channel to England by the wandering troubadours. By the 1800s, the melody had become popular in England, and people had added some simple words. Barlow’s arrangement is lush, warm, and replete with suspensions. It tenderly tells the story that is retold every year at Christmas time.

“This piece has special significance to me, as we sang it virtually as a choir during the Covid-19 lockdown when we couldn’t meet in person. How thrilled the humble shepherds must have been to be invited by angels to come see the newborn Babe who would give his life for all mankind.” — Andrew Luker, bass 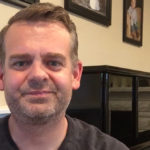 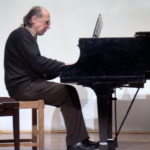