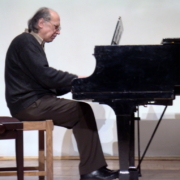 It has been approximately two months since the attacks on Ukraine began. We have been witness to the upheaval and atrocities the Ukrainian people are still suffering. When it all began, one of our baritones, David Layton, brought to Barlow’s attention a piece by Ukrainian composer Valentin Silvestrov. Barlow was moved by Silvestrov’s “Lord’s Prayer.

As we learned more of Silvestrov, we were gratified to find that the 84-year old was safely evacuated to Berlin on March 9th. His daughter and granddaughter urged him to evacuate, and he reluctantly agreed to travel with them. His grandson stayed behind as a volunteer with the war effort.

Silvestrov’s journey from Kyiv to Berlin took more than three days. Once he relocated, he sat down at the piano and played for reporters the premiere of a new work. He composed it during the evacuation while in buses, in cars, while waiting at the border. After he played, he stood up to say, “it’s strange, all these days have been so scary, and all the time there was such peaceful music in my head.”

The composer was born in Kiev in 1937. Alfred Schnittke and Arvo Pärt have both called him “one of the greatest composers of our time”. He began private music studies relatively late at age 15. For a while, he considered construction engineering but ultimately chose music as his life pursuit. Over the course of his career, he has won numerous prizes and has become a well-respected composer of world-wide renown. 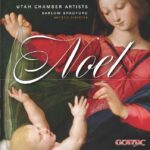