Thank you for supporting our Spring 2022 Cathedral Collage.
We were honored to premiere beautiful new pieces and providing a space of healing and peace at our April 2023 concert at the Cathedral of the Madeleine.  We look forward to returning next year!

We look forward to seeing you at our Cathedral Collage Concert coming up on April 25th and 26th. This year our program is called “Deep Peace.” As a community, we are still finding our way as we come out of the pandemic, and now we are faced with a tumultuous and dark world stage. Barlow has given a great deal of thought and care to the music we will perform.

We invite you to come and share in an evening of peace, light, and healing. Our choir and orchestra will present music  of Herbert Howells, John Rutter and Will Todd. We will perform new works of  Karen Thomas and Donald Skirvin, both friends of Utah Chamber Artists, and we’ll begin the program with a sublimely expressed Lord’s Prayer by Ukrainian composer Valentin Silvestrov.

Please come and spend some time with us in beauty and meditation. 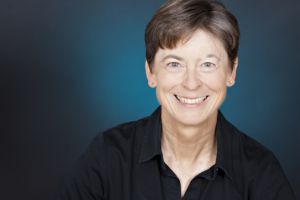 Karen P. Thomas, composer and conductor, is the Artistic Director and Conductor of the Seattle Pro Musica. Her compositions are regularly performed and broadcast throughout the United States, Europe, Asia and Latin America. Her compositions have been awarded prizes in various competitions, including the ASCAP Competition, the Roger Wagner Competition, Melodious Accord, and the International Alliance for Women in Music. Her commissions include works for the Harvard/Radcliffe Choirs, Grand Jubilee 2000 in Rome, the Washington National Cathedral, the American Guild of Organists, and the Goodwill Arts Festival, among numerous others.

As a conductor, Ms. Thomas has produced 14 critically-acclaimed commercial CD recording with Seattle Pro Musica, and has received the Margaret Hillis Award for Choral Excellence and the ASCAP-Chorus America Award for Adventurous Programming of Contemporary Music.

She currently serves on the boards of Chorus America and the American Choral Directors Association (NW Region), and previously served as a Commissioner on the Seattle Music Commission. She has served on the faculties of Pacific Lutheran University, Evergreen State College, Cornish College and Edmonds Community College. Ms. Thomas holds the degrees of Doctor of Music honoris causa from the University of Puget Sound, and Master of Music in Conducting and Composition from the University of Washington.
Panta Rhei

“When All Falls Silent”- Donald Skirvin 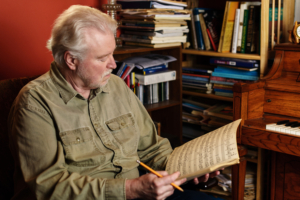 UCA has performed works by Donald Skirvin before. We are happy to continue to share his music. “When All Falls Silent” was written for Utah Chamber Artists 2022 premiere and the premiere of “Sandburg Songs” that sets poetry by Carl Sandburg in three movements, scored for SATB voices, string orchestra, and piano is forthcoming.

Donald Skirvin was the recipient of The American Prize in Composition for 2020 in the shorter choral works division. He studied music at the Jordan Conservatory of Music, Indianapolis, and at Indiana University, Bloomington. He is a member of ASCAP, and his music is available through J. W. Pepper and as self-published works. Choruses around the US and abroad have recorded and performed his music, which is available on eleven CDs, many of which are available from Naxos of America. He has received National Endowment for the Arts grants and numerous commissions from both local and national ensembles.

In his music career, Donald has served as a conductor, teacher, rehearsal pianist, composer and, of course, as a singer in many groups. His love of the voice is reflected in his output, which is largely choral. Although he has written instrumental works, he always returns to the human voice and the choral sound. Music critic David Vernier, writing for Classics Today, said that Donald’s work “is rich in imagery wrought by imaginative use of harmony and apt, sensitive text-setting. And it’s also just plain gorgeous music that speaks well for this composer’s facility with voices.” About choral composition, Donald says, “I want to create choral pieces whose music is deeply imbued with the voice of the poet. For such a piece to be successful and effective, I think the music must arise almost effortlessly and inevitably from the words themselves.”

Also on the program is “Angels Among Us” by British composer Will Todd, music of Herbert Howells, John Rutter and we are pleased to open the concert with a piece by Ukrainian composer Valentin Silvestrov.  Mr. Silvestrov is a revered composer around the world. Recently, he was successfully evacuated from Ukraine. 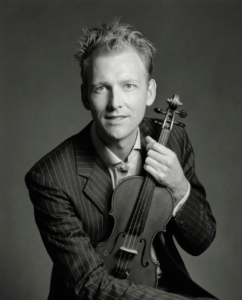 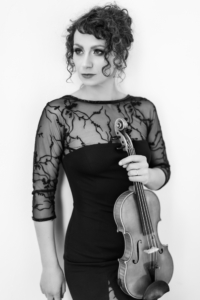 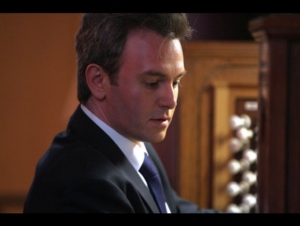 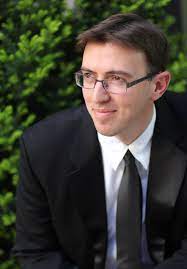